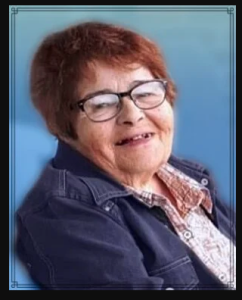 Marie-Imelda Gosselin passed away on November 24, 2021, at age 84, at the CHSLD de Baie-Saint-Paul. She was the former wife of Georges Christman and the daughter of the late Zéphirin Gosselin and the late Rosanne Lévesque. She lived in Quebec City.

The family will welcome relatives and friends at the Maison Gomin, 2026 Boulevard René- Lévesque Ouest, Quebec City, on Sunday, December 12 from 9 a.m. to 11 a.m. A Liturgy of the Word will follow at 11 a.m. in the chapel.

According to the public health measures in force, a rotation of 50 people at a time will be allowed during condolences; however, a greater number of people may be admitted to the complex. Wearing a mask will be compulsory and distance must be respected.

For those not be able to be present, the family invites you to join them virtually, live or recorded, and to attend the liturgy, by clicking the “CAPTATION DES RITUELS” icon on the online death notice at lepinecloutier.com.

The family would like to warmly thank the staff of the CHSLD Baie-Saint-Paul, the CHSLD Romain-Becquet, the Villa Micheline and the CLSC in Fortierville for their excellent and compassionate care.

You may express your sympathy with a donation to Opération Enfant Soleil or to the Jeffery Hale – Saint Brigid’s Friends’ Foundation, 1250 Chemin Sainte-Foy, bureau 439, Québec (Qc), G1S 2M6, for musical activities.