The final two English-speaking community groups scheduled to testify, the Consortium of English-language CEGEPs, Colleges and Universities and the Sherbrooke-based Townshippers’ Association, testified on Oct. 5 and 6, respectively.

John McMahon, vice-president of the consortium, spoke on behalf of the English College Steering Committee, which includes four Montreal-area English-language CEGEPs, Heritage College in Gatineau and the Champlain Regional College network, of which CEGEP Champlain-St. Lawrence is a member.

The proposed bill would cap the proportion of students in English-language CEGEPs to 17.5 per cent of the overall CEGEP student population and require English CEGEPs to prioritize anglophone students in admissions. It would also require graduates of English-language CEGEPs to take the same French test as graduates of French-language CEGEPs at the end of their studies, a provision which Dawson College director general Diane Gauvin called logistically untenable and “deeply unfair.” Members of the consortium were “surprised there was nothing in the bill to improve the French of our [non-francophone] students,” and suggested increased French-language course offerings, rather than standardized tests.

McMahon noted that the Montreal-based CEGEPs, many of which struggle with overcrowding, were willing to work within new caps on enrolment. However, he suggested a more flexible approach for CEGEPs in communities with smaller anglophone populations. “It’s not one-size-fits-all,” he said.

McMahon and Gauvin contested the narrative that English-language CEGEPs were “factors of anglicization” of francophone and allophone students. “Of course, we help young Quebecers become more familiar with the English language and develop skills that could be useful in their professional lives and help them discover other cultures,” Gauvin testified. “Also, through our diversity, we help students who don’t speak French as a first language perfect their French … and integrate into Quebec society. Unfortunately, we have been roped into a narrative where we are the villains and where bilingualism is equated with a slippery slope toward anglicization.”

The Townshippers’ Association is the only regional English-speaking community organization that was asked to testify at the hearings. Townshippers president Gerald Cutting and executive director Rachel Hunting spoke on behalf of the nonprofit, which promotes civic participation and pride in the English-speaking community of the Eastern Townships. “Reviving linguistic tensions, drawing international criticism for human rights violations and alienating communities that worked hand in hand with their francophone counterparts to build this province doesn’t suit anyone’s interests,” Cutting said. He worried that restrictions on who could receive government services in English would “deprive certain people of safe and efficient access to public services.” He expressed serious concerns about the bill’s use of the notwithstanding clause and called for the entire bill to be retracted pending further consultations.

“The English-speaking community of Quebec is not in the least responsible for the fact that English has become the common international language of science, technology, commerce and social media,” Hunting added. “In systematically failing to make a distinction between English as an outside threat, and the members of its own English-speaking community, the government is defaming our community. Restricting English in the workplace or limiting the rights of our community won’t affect the global situation, but will have a devastating effect on already vulnerable populations in rural areas, like ours.”

“There’s absolutely nothing in this bill that affects the rights of English-speaking Quebecers,” countered Justice Minister Simon Jolin-Barrette, framing the prioritization of English-speaking students for English CEGEP admissions as a “step forward for anglophones” and reiterating his past statements that “nothing would change” in regard to access to health care in English.

The Table de concertation d’organismes au service des immigrants et réfugiés (TCRI) raised concerns about a provision in the bill that requires new arrivals to receive government services in French after six months. “There are a lot of [bureaucratic] steps to take when you move to a new country, and a lot of the time, they take much longer than six months,” said TCRI director Stephan Reichhold, noting that many immigrants arrive in Quebec with temporary or precarious legal status. “Limiting interaction with the public service to French only risks cutting the link between the immigrant and the state, and no one wants that.”

The TCRI delegation added that even with the best of intentions, immigrants in some regions might not be able to access French courses within six months due to waiting lists.

Premier François Legault is expected to prorogue the National Assembly this week and open a new legislative session Oct. 19. Once the current parliamentary session is closed, all legislation in progress, including Bill 96, will technically die on the order paper. However, the government will be able to bring back certain bills and resume the legislative process where it left off, and the prorogation is not expected to change anything for Bill 96.

Generosity is at the heart of latest MCQ exhibit Cassandra Kerwin cassandra@qctonline.com As the COVID-19 pandemic brought the world to a halt last year, countless generous people and organizations rose…

WALK ON THE WILD SIDE: Look up in the sky…someone is watching you! Lise Lafond lise@qctonline.com You cannot look up at the night sky on Planet Earth and not wonder…

Lions hockey team finally gets first win at home Luc Lang luclang@qctonline.com Zacharie Charest scored his second goal of the game with 12 minutes left in the third period to…

OPEN LETTER: Thank you to Deputy Mayor Michelle Morin-Doyle Madam Deputy Mayor / Dear Michelle: The past 12 years have gone by much too quickly. It seems that only yesterday… 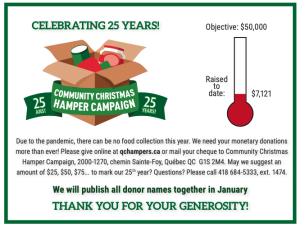